Mary-Kate and Ashley Olsen were guests at Hillary Clinton’s very first fundraiser of 2016 this afternoon in New York City, a source who attended the event confirms to ABC News. Singer, Tony Bennett, was also at the fundraiser, per the source.

This afternoon fundraiser – hosted by hedge fund titan, Richard Perry, and his wife and fashion designer, Lisa Perry – was the first of three fundraisers Clinton is attending in today in New York City.

According to an aide to Clinton, approximately 120 people attended this first fundraiser, which was held at the Perry’s Manhattan ease-side apartment at 1 Sutton Place, overlooking the East River.

Each of the fundraisers today costs $2,700 to attend and is hosted by what the campaign calls “Hillstarters” – a supporter who has donated $27,000 or more to her campaign.

It’s unclear how long Mary-Kate and Ashley Olsen have been Clinton supporters. Last November, the twins were seated at the same table as Hillary Clinton during a gala in New York City. Perhaps that’s where they bonded. 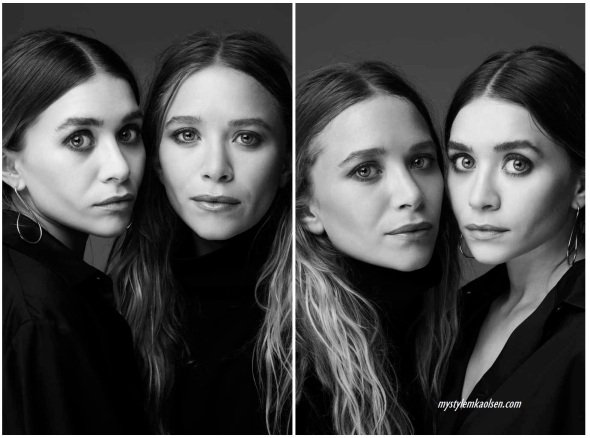 The Row: The Quiet Ones

Mary-Kate Olsen and Ashley Olsen have surprised, impressed and in many ways trailblazed their way into the fashion industry, where their reputations are not as novelty former child stars but legitimate aesthetes and serious designers with a formidable business. At this point it feels almost impolite to mention their prior sitcom lives (although due to the timing of this interview, the day after their former costar John Stamos announced the Netflix spinoff of “Full House,” one feels obliged).

The Olsens, now 28, were early to the concept of rarefied basics. Back in 2005 when they moved to New York from Los Angeles to attend New York University, they wanted T-shirts made to a T: the perfect fit, the perfect fabric. Now you can’t walk through a department store without dodging racks of “perfect” upscale this and that.

Originally, the product was intended as a charity project. “It was something we just wanted for ourselves,” says Ashley, sitting beside her sister behind a gigantic shared desk in their office at The Row’s TriBeCa studio, which they have occupied since June 2011. “It wasn’t something that I thought would ever be a business.”

But a business it is. The Row — its name derived from the holy grail of tailoring Savile Row — is sold through 164 points of distribution in 37 countries with industry insiders estimating $50 million in annual sales.

Last May, The Row opened its first store on Melrose Place in Los Angeles in the 3,800-square-foot former Sally Hershberger and John Frieda space, where the twins used to get their hair done. The brand’s second flagship will open in New York early next year, a town house at 17 East 71st Street on the Upper East Side. The sisters have a successful handbag collection and shoes look likely in the short-term after a prolonged, perfectionist research and production phase. “It’s been a three-year conversation,” says Mary-Kate of figuring out shoes.

The company has around 60 employees, seven on the design team, including Mary-Kate and Ashley. A Paris office opened in 2011 and the European market is being nurtured slowly, while the U.S. makes up the bulk of distribution for the label.

The original perfect T-shirts, blazers, black leather pants and other wardrobe staples have evolved into a full-yet-focused collection of exquisitely tasteful grown-up clothes that mix the classic and minimal with elements of subdued bohemianism. It’s quiet luxury at its finest, rendered through a slow-wrought artisanal approach. Everything The Row offers, aside from a few sweaters, is produced domestically, a practice that is reflected in the collection’s price tags, which range from around $300 for a T-shirt to nearly $5,000 for a classic coat.

“It was approached as a passion project and it was baby-steps and wasn’t coming from any other place but creativity and there was such a purity and innocence,” Ashley says. “I look back and I’m like, ‘Where did I get the gumption to go out and do that and meet with these people?’”

Asked if their high-profile celebrity background made it harder to be taken seriously, she replies, “I think there’s a very obvious answer to that question. It never stopped us from working hard. It never got in the way of our end goal, which was to make clothes for women.”

There was a learning curve. Despite having a billion-dollar company, Dualstar Entertainment Group, with a thriving licensed apparel business for the mass market at the inception of The Row, Mary-Kate and Ashley had no experience at the other end of the market, where relationships and trust are hard-earned. Mary-Kate recalls the early days of trying to sell the fall 2007 collection in Paris when she, her sister and two other employees would rent an apartment and take sales appointments. “We would be selling the clothes off of us,” she says. “We had a rack and the stores would come in and say, ‘OK, explain every garment, take us through it.’ And they would say, ‘If you’re here next season we’ll do this again.’ They wanted to make sure we were going to show up every season, the product to be shipped on time, and it was going to evolve and be well made.”

Naturally, there were items that didn’t sell as well as expected or things that took a while to catch on, such as wide-leg pants when skinny fits were still all the rage, heftier fabrics when the regional climate called for lightweight, but The Row has never had a collection that bombed. No tacky moments, no egregious stylistic missteps.

The trends are reserved for Elizabeth and James, the Olsens’ cool yet polished contemporary line named for their two siblings. The Row is purely upper echelon. Mary-Kate and Ashley won their first CFDA Award for Womenswear Designer of the Year in 2012, took home the Accessories Designer of the Year Award last year, and are nominated in both categories again this year.

On the path to proving their mettle, the sisters didn’t go out of their way to curry favor through old-fashioned apparel industry marketing standards. They have eschewed procedural protocol in many ways, which has been admirable and, at times, irritating. Their relationship with the press can be elusive, and was especially so in their early days. They forwent formal runway presentations until fall 2010 and still refuse to let outside photographers shoot their shows. Nor do they indulge the standard inspiration-laden sound bite queries post-show. For example, after staging their fall 2015 show on the vacant 35th floor of the Mies van der Rohe-designed Seagram Building, Mary-Kate summarized the collection succinctly: “I think the space really says it all.”

They are reticent to extoll their aesthetic ambitions — or maybe just refreshingly matter-of-fact. “It’s always, purchase our fabrics first and figure out our proportion of the season,” Mary-Kate says. “We design in a very mathematical way. We have a sku count in the system and we design into it that way. We’re very aware of budget and the way what works and what doesn’t work.”

The Row has also yet to mount an ad campaign. “We think about it,” Mary-Kate says. “We’re definitely like, can you put that budget aside? We try to think about our clients and if it’s going directly to them and who it’s impacting. We like to think about if you put your dollars toward something, you’ll see a return, and [a campaign] is more of an up-in-the-air thing.”

To her point, the business has more than hummed along without the aid of traditional marketing channels, even the boon that certifiable celebrity can bring to fashion enterprises, which the Olsens deliberately avoided. At the time of The Row’s launch, the clothes had a thin, hand-stamped gold chain rather than a label, no public relations, no overt link to Mary-Kate and Ashley Olsen for the consumer to connect with, though presumably their loyal clients are now aware of who’s designing the clothes even if the general public isn’t. It was solely word of mouth. “That started telling us something, which was that if the product was right it would sell, without anyone knowing what it was,” Mary-Kate says.

Retailers love the collection and see it as a scalable business, despite its slow, steady and domestically produced mandate. “The Row has quietly built an incredible business, both commercial and directional, with a tremendous following,” says Daniella Vitale, Barneys New York’s chief operating officer. “With an expanding retail footprint and international presence, the development of their leather accessory business, and hopefully the launch of shoes, will help to catapult them to the next level. They also have a tremendous opportunity in the fragrance and beauty space when they are ready.”

When they are ready. That is the lead strategy at The Row. Asked about a five-year plan, the sisters will only say they have one, but it’s flexible. For example, they originally intended to open a store in New York first but prime real estate came up in Los Angeles. To that end, as for future growth and goals, the most specific thing on the agenda is the forthcoming New York flagship, which, if it’s to be the East Coast equivalent of the L.A. store’s shiny, at-home midcentury cool complete with a swimming pool, will be very special.

The sisters hold themselves accountable to their customers and themselves. “It’s a different thought process,” Ashley says. “We own our company. We’re not really being told by anyone else what to do or what numbers to hit or being pressured to be doing anything. The pressure comes from us. It’s not external.” 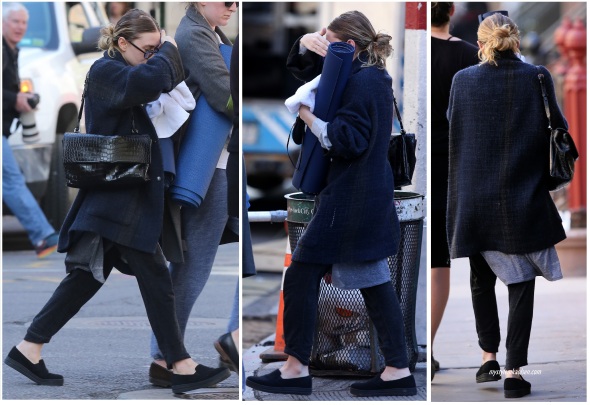 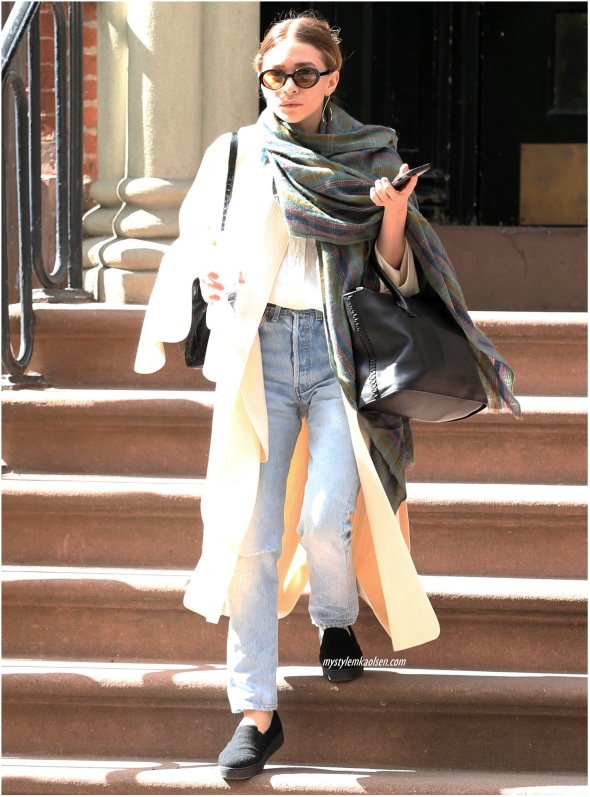 All greetings! If you are admirers of style Mary-kate and Ashley Olsen you have got on that page)On my page the large quantity of photos MKA Olsen in their best of the dress is laid out, since street and finishing secular actions!!!I wish you pleasant viewing and I hope that you become my constant visitors P.S. authorship of pictures that I post on my bloge- I do not pretend! all that you see, I find on the Internet :)